Embassy of the Republic of Botswana in Germany 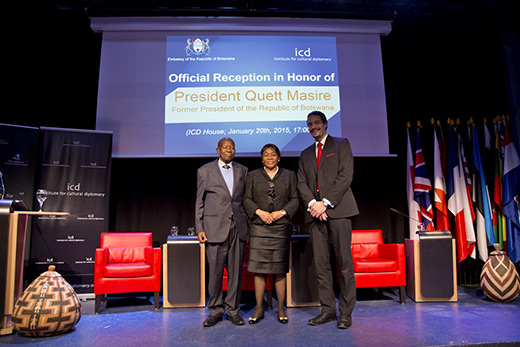 On 21st January 2015 Former President H.E. Sir Quett Ketumile Joni Masire addresses an audience of more than 150 people, including African Ambassadors, academicians and researchers at the Institute of Cultural Diplomacy.

The event whose objective was to profile Botswana culture as a way of attracting tourists was organised by the Embassy of the Republic of Botswana in conjunction with the Institute.

In his remarks the former president focused in selling Botswana Culture as a communication tool for what the country stands for. He informed the audience that Botswana’s natural and cultural gifts are used to attract tourists to visit and appreciate the beauty of the country. He highlighted the Okavango Delta as one of Botswana’s tourist attraction, which was inscribed as the 1000th World Heritage Site in Qatar early 2014. He stated that investment in tourism should be balanced, sustainable and in conjunction with culture and nature. The government recognized that culture plays an important role through which youth see themselves as role players and with the ability to engage the world. Sir Masire expressed delight in the opening of the Embassy in Berlin as it will facilitate promotion of cultural exchanges between Botswana and Germany as well as a better understanding of Botswana’s culture.

Embassy of the Republic
of Botswana
Lennestraße 5
10785 Berlin